1970'S: THE DECADE OF PERSONAL LIBERATION AND REBELLION AGAINST AUTHORITY

​The 1970's was an era that breaded change and self-love. It’s remembered for its contribution to the women’s rights, environmental rights, gay rights, and generally a time of self-expression which encouraged everyone to thrive and personal enjoyment of life was flourishing. There were no cellphones, personal computers, or cable yet but people were content with their activities such as music, movies, and games. Disco music was coming into its own but iconic legends of the 60’s was still just as appreciated, such as Led Zeppelin, The Beatles, and Pink Floyd. Timeless movies were like Star Wars, Grease, and Jaws were the peak of entertainment and forever favorite actors/Actresses’ were starting their journeys, like John Travolta, Clint Eastwood, Burt Reynolds, Farrah Fawcett and Diane Keaton.
However, for the purposes of this project we want to focus on the evolution of womanhood and what its advances consisted of in the 1970’s. Important topics of this decade dealt with equality, discrimination, and womanly autonomy. Women in the workforce and education arenas were starting to challenge their boundaries and demand their fair share of chances and opportunities. Women were fighting against the systematic incorporation of sex and race based discrimination, fighting to take back their rights and wanted to be recognized for their potential. Controversial issues, that are still being debated in society today, such as abortion and woman’s right to self-expression were just starting to be addressed. On the collective research done for this decade I highlighted the two most influential individuals and organizations that I felt really tackled these topics of the 1970’s and are a good representation of womanhood and feminism of that time period. 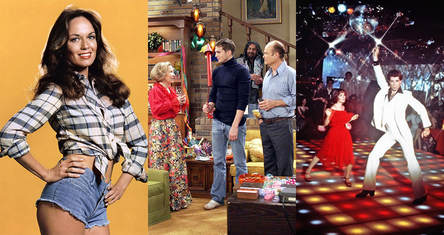 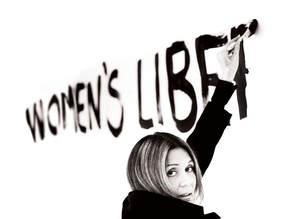 ​IMPORTANT INDIVIDUALS
Gloria Steinem:
In the early 1970’s Gloria Steinem was involved in many notable contributions to the feminist movement, such as, testifying before the United States Senate on behalf of the Equal Rights Amendment, co-found Ms. Magazine which is the first magazine to be created and operated solely by women, and also co-founded the National Women’s Political Caucus which increases the number of women in the political field. The late 60’s and early 70’s was just the beginning of Gloria’s life long run as a feminist activist and she has done many amazing things throughout her life.
I chose Gloria as one of the important women of the 1970’s because she is influential   writer, speaker, activist, and feminist. Gloria has spent her lifetime creating awareness and demanding change for topics that require more attention. She helped found New York Magazine, Ms. Magazine, wrote numerous books, produced documentaries about child abuse, the death penalty, and violence against women, and many more amazing accomplishments that helped her earn the highest civilian honor, the Presidential Medal of Freedom, which President Obama presented to her in 2013.

​Barbara Smith:
I chose Barbara Smith as one of the influential women of the 1970’s because she not only a strong leader for woman rights but also for racial equality. Barbara Smith was first introduced to the concept of feminism on her college campus when a white woman was giving a speech, and said the concept was hard for her to grasp initially because from her perspective and understanding of white privilege. After graduating college and spending sometime in the real world she acknowledged how she began to see the imbalance between women and equal rights and that is when she finally became intrigued with the context of feminism.
In the early 1970’s Barbara began working in the Black feminist movement field. Barbara had a twin sister who worked on the staff of Gloria Steinem’s Ms. Magazine and met with Margaret Sloan, who was the co-founder of the National Black Feminist Organization who invited both of the sisters to their event. After visiting this event Barbara met with other women of influence and attempted to establish a local chapter of NBFO in Boston, however that plan fell through and herself, her sister Beverly, and Demita Frazier founded the Combahee River Collective in 1974. 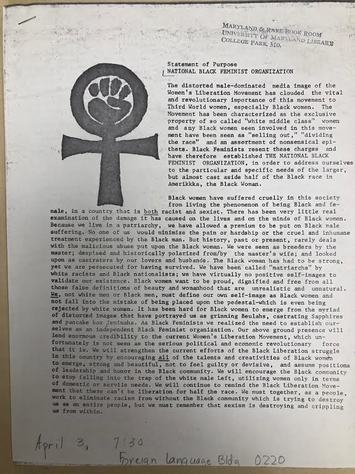 ​MPORTANT ORGANIZATIONS:
Combahee River Collective:
Founded in 1974 by Demita Frazier, Beverly and Barbara Smith the Combahee River Collective was a Boston based organization that was born out of "second wave" feminism and remained active 1980. It became one of the most iconic Black feminist socialist organizations because it was built the basis which gave a foundation for the Black feminism perspective to argue that sexism, racism, and racial oppression are all connected. One of the key aspects of their movement was how the projected that the liberation of Black women wouldn't only benefit Black women, it would be a liberation for women all around the world. The objectives of this organization was to be an outlet for black feminist ideology that wanted to challenge the mainstream feminism movement that was focusing on the sex and gender oppression of middle class white women, while also examining the bias’s and discrimination that was taking place within the black community.
Smith explained that why the organization was branded by this name was because they were heavily motivated by Harriet Tubman's heroic legacy who was responsible for the liberation of hundreds of slaves via the Combahee River in South Carolina. They thought that this name was fitting because they were a collective group of motivated, progressive black feminists who were extremely determined to incorporate their political experience to facilitate a movement that focused on the conditions black women were facing in society. One of the most notorious manifestations of the CRC’s efforts was when they joined an initiative to stop women of color being sterilized against their wills; doctors were pressuring mothers immediately after they had given birth to consent to sterilization, which is a complete manipulation of women’s right to autonomy and a blatant display of inequality and horrendous lack professionalism based on who the patients were and what their race was. The CRC became inactive in 1980 when both Smith and Frazier moved on to more significant works of political activism.
National Black Feminist Organization:
The National Black Feminist Organization was founded in 1973 by Florynce Kennedy, Eleanor Holmes Norton, Margaret Sloan, Faith Ringgold, Michele Wallace, and Doris Wright. There were about 2000 members of the NBFO and their mission was similar to that of the CRC, in that it was focused on the double standards black women were facing in the 1970’s. At this point in time the Women’s Liberation Movement had seemingly been owned by the middle-class white women and ultimately was still dominated by the male hierarchy. Black feminist came resent the backlash they were being burdened with concerning this point of view, and thus the NBFO was born. They declared that their specific needs were being almost entirely ignored in “Amerikkka” and that their purpose was to claim their rights.
The NBFO had satellite chapters that remained active until the 1980’s but the national organization came to an official end in 1976. There were fundamental disagreements on what the concept of a true black feminist was, what strategies to pursue liberation would be most effective, and wandering loyalties to other causes were the ultimately why the NBFO succumbed to its quick end. Nonetheless, the served their genuine purpose and created an everlasting name brand for themselves and their cause that can still be referenced today as a monumental aspect of the Women’s Liberation Movement as a whole.